MRI time. The only time I really think about NF.

So it was time for Kyle's MRI.  It's hard to believe that it has been two years since his last one. It's always the same feelings I get though.
Right before, I get worried about how I am going to let him know that he is having one. And then when we finally approach it, I worry how he will be during the course of a very long day at the hospital.  Then, there is the anxiety of standing next to him while he is being sedated and trying to be strong and not break down when I see him go out. And finally, I worry about the results.   But all my worries were diminished because this little boy handled everything like a champ.
Before the MRI, he didn't say much about it. Just said "ok mom" when I told him we needed to go get pictures of his brain again.  Then,the morning of the MRI, he said he was scared. I have to give Women and Children's hospital a lot of credit here.  They have this amazing woman named Tara, whose title is a "child life counselor" and she walks around the waiting room and talks to the kids if they look scared. She sat with Kyle for a long time, explaining to him what the radiologist was going to do and showed him everything that they would use. He was able to pick out a special scent (Chapstick) and put it on the mask so it wouldn't smell bad. This helped ALOT.  I thank God for this woman. He seemed fine after that.  We got him on the table and Ken and I held his hand and we watched him go to sleep.
That was Thursday.  The nurse at the hospital said to call the office on Friday and see if the results were available. So I did.  I already knew I would have a problem.  First of all, when you call the neurologist office, you rarely get a human to speak with.  I left a message on the voicemail requesting a call back. That was at 9am.   By 2pm, I still had not heard back.  I called again, and finally got the nurse. I explained that I was waiting for my sons MRI results and that I was very nervous about them and if she could please have the doctor call me back.  That's when she told me that the doctor is out of town, and I would have to wait until Tuesday.   I couldn't believe this. Was there not a covering doctor there to read it?  I asked this and she said no.  So more waiting.
Monday came and I thought I would just double check to see if possibly my pediatrician got a copy of the results and maybe she could give them to me.  She said she would try and get them but a copy was not sent to her yet.  I heard nothing.  Tuesday.  I called the neurologist at 9am and left another message stating that I was extremely nervous and I would like a call back from the doctor ASAP.   It was almost 2pm when I gave up waiting for them and called the pediatrician back, practically begging them to see if they could give me the results.  Kyles ped then called the neurologists office and then called me saying that she left a message telling them to call me back.
15 minutes later.  Finally the neurologist called me. The spots in Kyle's brain that were already there, have got bigger. And he has a new cluster of spots on one side of his brain. After the doctor told me this, it was like he read my mind and instantly said "it's not tumors but we need to have him get another MRI in a year to watch them".
So what do I do with this information? Cry. Worry.  Cry some more.  But I can't control what is happening and maybe it will end up to be nothing and maybe it won't.  All I know is that I will do whatever it takes to take care of my child.  My beautiful sunshine.  My 8 year old boy.  My Kyle. <3. 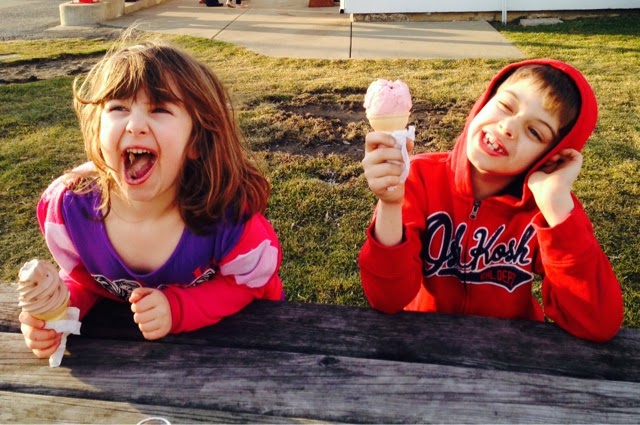 Hailey and Kyle...  We all deserved icecream today :)
Posted by Aimee at 8:48 PM