My son and dealing with knowing he has NF type 1. 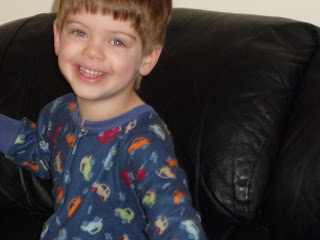 
Have you ever seen a movie where somebody is talking to somebody else and that person is hearing the speaker in a echo.  Kind of like they are not really there but some form of speech coming out of nowhere.  That was me that day when the neurologist at Children's Hospital told me our son's diagnosis.  Except this was not a movie or a bad dream.  It was real and when the tears finally stopped coming down and I was able to ask questions it was too late.  The doctor was a fast talker and did not want to get into detail.  The most he told us that day was that the disease is typically genetic as he stared at my skin and looked at both Ken and I up and down. He said it was incurable and can progress or not progress and sometimes can get worse during puberty.  He said it could cause tumors behind the optic nerve or in the brain and MRI's would need to be done consistently.   He handed me a little booklet that only offered websites to follow and maybe an address or two of NF foundations to donate too.  I was scared, confused and lost.  I felt all kinds of guilt thinking that maybe if I breastfed this would not have happened.  Or maybe it was because I drank pepsi while I was pregnant.  I had a million things running through my head that day and I could not even talk about it because talking about it would make it real and it was still not reality to me yet.  It was just a bad dream.


Of course we asked everyone in the family.  "Have you heard of this?  Do you know anyone that has or had it?"   The only response I got from anyone was "What is it called again?".  "Neurofibro-what?"  "How do you know he has it?"  Finally a good question.  When Ky turned around 8 or 9 months old these "spots" started showing up on his body.  He had around 5 when I first noticed.  Then a month or two later it was 10.  A little while after that I counted around 20, all in various places on his body.  The pediatrician told me they were called cafe au lait spots and they were normal birth marks unless a person had more than 5.  The tests would need to be done.  She set up Kyle for a MRI of the brain and that's how we found out that he also had a spot in his brain that confirmed he had NF.  I remember getting the call like it was yesterday and ended up writing about it in support group forum called inspire.  (www.inspire.com).  Here is a copied version of it.  To date it was one of the worst days of my life.


Well, I finally got a call from Kyle's neurologist letting us know what the MRI results were. No tumors, lesions or masses to be concerned about, however, the MRI did show spots called NF1 spots in his brain. All this means, according to the doctor, is that he most definitely has Neurofibromatosis. He wants to see Ky every 6 months.
I knew this already right? I should not have been shocked. But I guess I had it in my head that the MRI would be fine and the doctor would tell me that Ky would be fine and we dont have to see him anymore. I guess I was being overly optimistic. If everything happens for a reason, like I say I believe, then why is this happening to my son? Why him? And I know there could be worse things, I do, but why should he have to go through anything at all?So after hearing this, I went to Borders to see if they have any books on Neuro. The man there was really nice and politely told me no, we dont have anything. Then I went to Barnes & Noble to see if they had any books on it because I am really striking out online. I go up to the counter where a man was standing. He looked 30ish, tall, skinny with glasses. Definetly looked like he belonged there. I asked him to check his computer for any books about NF1. He says to me... "Isnt that like the Elephant Mans disease, ha ha" I just looked at him. I said nothing as he checked his computer, only to tell me that they didnt have anything. He looked up at me and saw my face, which, I know was pure devastation. He walked me over to the kid-parenting section. Handed me a book on Autism. I just looked at him again. Then he says to me, "I can order a book for you, but its like 790 pages and it is meant for doctors." Oh boy...here comes the tears. In the middle of Barnes & Noble, here I am crying to this skinny little punk that I just wanted to punch. I told him..."Maybe I am not ready for this yet, thank you." As I turned around to leave I hear him behind me telling another co-worker that he thinks he just made a customer cry, bragging, I should say, since there was not even a hint of sympathy in his voice.


So my story continues along still confused and hoping to get more information from anyone or anywhere.  I googled NF online which was a huge mistake for me at the time, reading how NF patients can end up deformed and in wheel chairs.  I would read and cry and read and cry asking myself, Ken and God, why?  Why my son?  In my internet search I found a children s book called NF Buddies.  I highly recommend this book for anyone trying to explain to their child what NF is and why they are seeing so many doctors and going to the hospital from time to time.


Now we fast forward a bit to last summer.  I am at Zebbs with the kids eating lunch and my phone rings.  Its the neurologist.   Looking back, I should not have taken that phone call at that moment.  I should have finished lunch with my children, taken them home and then called the doctor back.  But because I was anxious to hear the MRI results I took the phone call.

"Mrs. Hess I am calling to tell you that the MRI showed some spots in Kyle's brain that we did not like so we would like to have him do another MRI a little earlier than usual."   All I could focus on in that moment were the words "spots we do not like".  The tears started flowing and my anxiety level went sky high.  I wanted to ask a zillion questions but with my son being right there I did not want to scare him.  So I managed to get out the words "ok"  and "yes, I will call and schedule the MRI".    Later that day while we were at a friends house for a play date I got a call from Kyle's pediatrician who also read the MRI results.  I was able to ask some questions and she answered them the best that she could and was much more supportive saying that the spots were typical in NF patients and to try not to worry to much until after his next MRI. 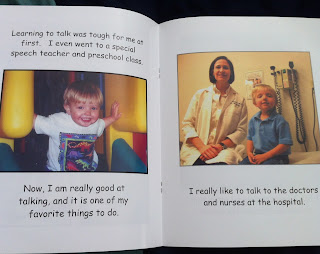 How has NF affected Kyle so far?  Looking at him you would never know he has anything wrong.  He is a sweet, sensitive, caring, beautiful little boy that everyone adores.  If you look at his skin he does have many cafe au laits.  That was my first clue.  Then when Ky was 2 years old and still not talking much, that was my second clue.  NF causes many delays.  Kyle has had struggles in school but we are lucky enough to have full support from the school system and he has received many services that have helped him get this far.   He even went through a special program called Tomatis which I believed helped him immensely.  I am proud to say that this is the first year he will be working without a special education teacher by his side assisting him and he is in a regular first grade classroom.  He is still pulled out for speech therapy, occupational therapy and physical therapy.   He does have muscle weakness but my husband signed him up for Tae Kwan Do this year and we believe that is helping a lot.  My husband and I are very proud of Kyle.  He is working so hard and wants to succeed! 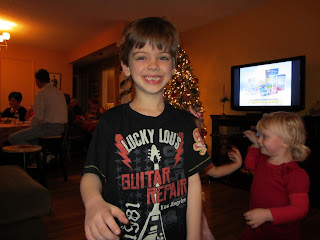 His next MRI is January 31, 2012.  I am dreading it.  They have to put him under anesthesia because he is unable to remain still for the 45 minutes that it takes to get images of his brain.   He is scared and so am I but I try to be strong for him until he can not see me anymore and that is when I usually breakdown to my husband.  Then we wait for the results.  I pray everyday that he will only carry a minor form of the NF and the MRI will come back as normal as possible.

Why did I write this?   Besides being a minor venting session for me, I hope it brings on awareness and support to others.  Here is a link that I found the most helpful (and less scary)     http://www.nfcalifornia.org/index.aspx


Basically, all I can do is hope for the best and try not think about it everyday. I have to keep positive and be strong for Kyle and make sure we are keeping up with all of his MRI's and doctors appointments and helping him with his delays and being supportive and proactive.  As long as I am doing that I feel like I am doing everything I can do to help him.  We love him more than life itself.

I am asking all my family and friends to read this and please know that I am not looking for your sympathy but only your SUPPORT as we go through this journey with Kyle.  I will keep everyone updated as much as possible.  We love you all <3

Any money that is earned from this blog using AdSense will be donated to this important cause.  Thank you for reading.